December is upon us! The end of 2012 is near and if the Maya’s are right, the end of the world as well. Personally I hope it’s just the end of 2012. Some cool stuff is happening in January so I really hope the word will survive.

2012 is coming to an end and as in every year the “best of” lists are starting to appear. This lists are a personal favorite of mine. I love these lists as they give you a second chance to catch up on things you’ve missed or just give you a quick summary of what really stood out that year and you’ve already forgotten.

Back in 2007 and 2008 I was writing music reviews for a web-magazine called ‘Alternative-zine.com’ and was in-charge of those ‘end of the year’ lists. Back then I felt I knew every album worth knowing and played every track worth nodding your fingers, hips or head to (How very Hipster of me). Even though I haven’t written a music review since, great music has always been my passion.

Seeing those 2012 music lists and polls starting to pop up everywhere got me thinking – How could these lists be more interesting? Do they really represent what people listened too this pass year? I actually doubt it.

As I was going through my Facebook and Twitter feed I saw people sharing their 2012 favorites. Their song selections  varied and they posted some really ?(missing an adjective) tracks. This got my creative juices flowing. I wanted to make a social ‘best songs of 2012’  list, in which the list would be based on the music people actually share and listen to on their social profiles.

So I had a chat with my friend Sagee,  who heads a great team at Serendip.  Serendip is a pretty young and awesome start-up.

What Serendip does, is create a personal music channel in real-time based on music shared by the people you follow on social networks. In a nutshell, it’s a music station based on what your friends share on their Social Networks.

Together we crafted the first ‘REAL people choice awards’. The first ‘best songs of 2012’ list that is actually built on the music people share on their social networks

How does it work?

There are 3 ways you can participate:

3. If you’re already using Serendip you can give a Rock On (Serendip version of ‘Like’)

Don’t want to participate but still want to enjoy the best tracks of 2012? Just enter the special #PCA12  page on http://serendip.me/pca12 and enjoy the best songs of 2012 shared by REAL people!

Go ahead and start sharing!

I can’t wait to discover the great songs you’ll be posting,

Have a good one, 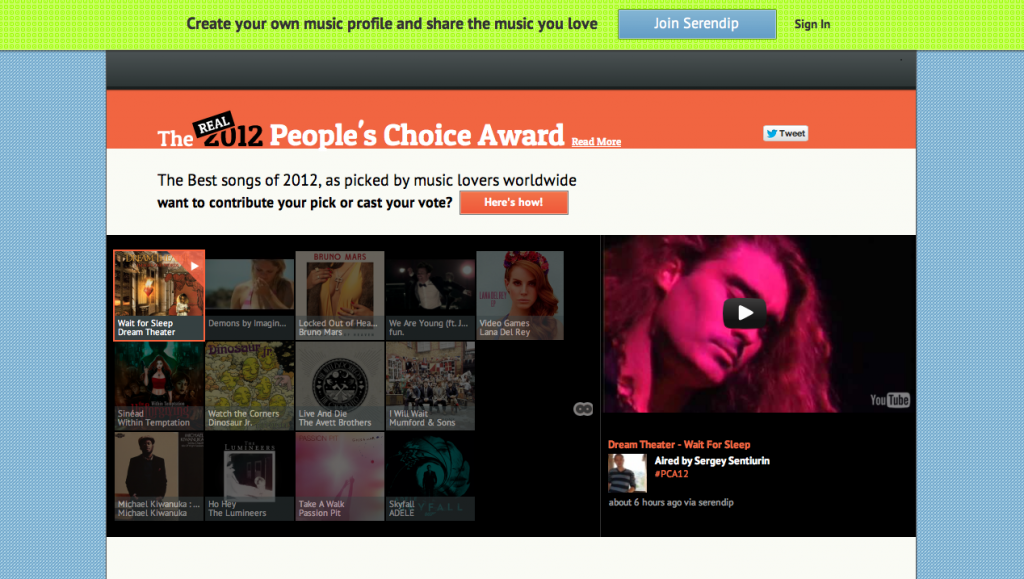